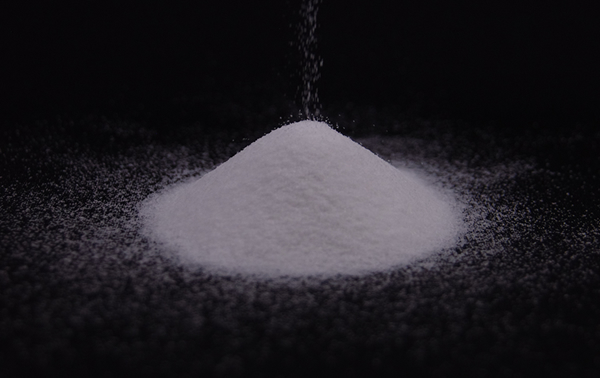 Sodium bicarbonate is known as a natural ingredient in hot springs and is a safe substance. As environmental impact becomes a more immediate problem, its gentle effects and natural qualities have been reassessed and it has come to be used in a variety of fields.
It has a multitude of uses from everyday goods to pharmaceuticals and beyond. To meet the ever-increasing needs and expanding applications, AGC, the largest manufacturer of sodium bicarbonate in Japan, offers a selection of grades and is putting efforts into the development of new products.

Sodium bicarbonate is a white powder with molecular formula NaHCO3, and pH of 8.5 (1% aqueous solution, 25°C).
Among sodium compounds, it is one of the substances with the lowest alkalinity.

- It can be poured into water as is -

Sodium bicarbonate solutions have the effect of moderating pH changes.

- It is a safe inorganic substance -

Among registered and existing chemical substances, it is extremely safe and can be stored in stable form at room temperature and ordinary pressure.

There are 2 types of manufacturing processes for sodium bicarbonate: Wet and dry.
Generally, the method used for large-scale production is the wet method in which sodium bicarbonate is precipitated as crystals by infusing carbon dioxide gas into caustic soda derived by electrolysis to cause a reaction, and AGC uses this method to manufacture its sodium bicarbonate.

Separates and removes trace amounts of impurities in the raw material solution. Processed solution is sent to the purification solution storage tank.

After drying separated sodium bicarbonate, it is then arranged by particle size using a sieving process and turned into a product.