Our mission: Meeting the challenge of developing new refrigerants
and solvents with low global warming potential —The AMOLEA™ Series of environmentally-friendly refrigerants and solvents—

In recent years there has been a global increase in the frequency of droughts, major floods, record-breaking rainfall, catastrophic storms, vast forest fires, and other natural disasters linked to climate change. If world greenhouse gas emissions continue to increase at the current rate, the average world temperature is expected to rise by as much as 3.9⁰C by the end of this century compared with the level before the Industrial Revolution, with devastating consequences for our lifestyles and society*. We can no longer afford to delay action on the climate crisis.

AGC Chemicals has dedicated itself to the vision of “Chemistry for a Blue Planet.” In line with that vision, we are focusing on research and development targeted toward the creation of products that will contribute to the reduction of greenhouse gas emissions. The progress that we have made in one area of technology has resulted in the creation of the AMOLEA™ Series of environmentally-friendly hydrofluoroolefins (HFOs), including air conditioning refrigerants and cleaning solvents. A key advantage of AMOLEA™ refrigerants and cleaning solvents is a global warming potential (GWP) hundreds of times lower than that of earlier products. This innovative technology is attracting attention as a solution to the climate change problem.

Logo for the AMOLEA™ Series of environmentally-friendly refrigerants and solvents

Contributing to the Achievement of the SDGs 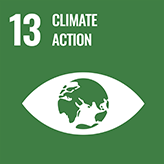 What are the SDGs?

Used as air conditioning refrigerants
and cleaning solvents,
hydrofluorocarbons (HFCs) have helped to maintain
our lifestyles and industrial society. 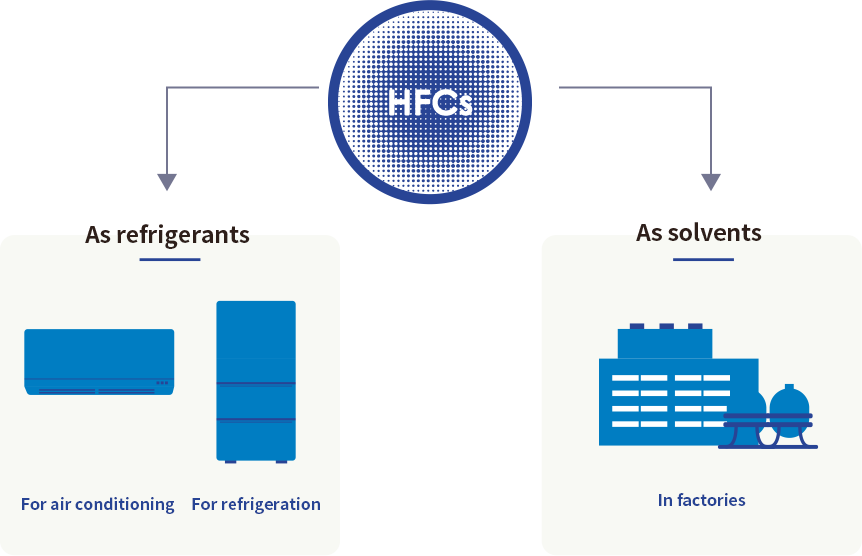 Specified chlorofluorocarbons (CFCs) have excellent properties and were once used globally as refrigerants and for a wide range of other purposes. Unfortunately, scientists discovered that specified CFCs were causing environmental problems by damaging the ozone layer. An international agreement* was signed with the aim of ending production of specified CFCs in major countries by the end of 1995. The emergence of hydrochlorofluorocarbons (HFCs) as an alternative to CFCs was instrumental in halting anthropogenic damage to the ozone layer. HFCs are still used as refrigerants in air conditioners, freezers, and refrigerators, and as cleaning solvents in manufacturing processes. Used for a wide range of purposes, these chemical products play a key role in our lifestyles and society.

The Problem with HFCs

Global warming is caused by six greenhouse gases, including carbon dioxide and methane. Carbon dioxide has had a particularly serious impact in the modern world because of the use of fossil fuels, such as oil, coal, and natural gas, as primary sources of energy. A major disadvantage with HFCs, which have been widely used as alternatives to specified CFCs, is their extremely high global warming potential (GWP). The GWP of HFCs is around 2,000 times higher* than that of carbon dioxide.

* The GWP of the refrigerant used in common room air conditioners (R410A) is 2,090 times higher than that of CO2.

HFCs contribute to global warming,
and their use is being phased out globally. 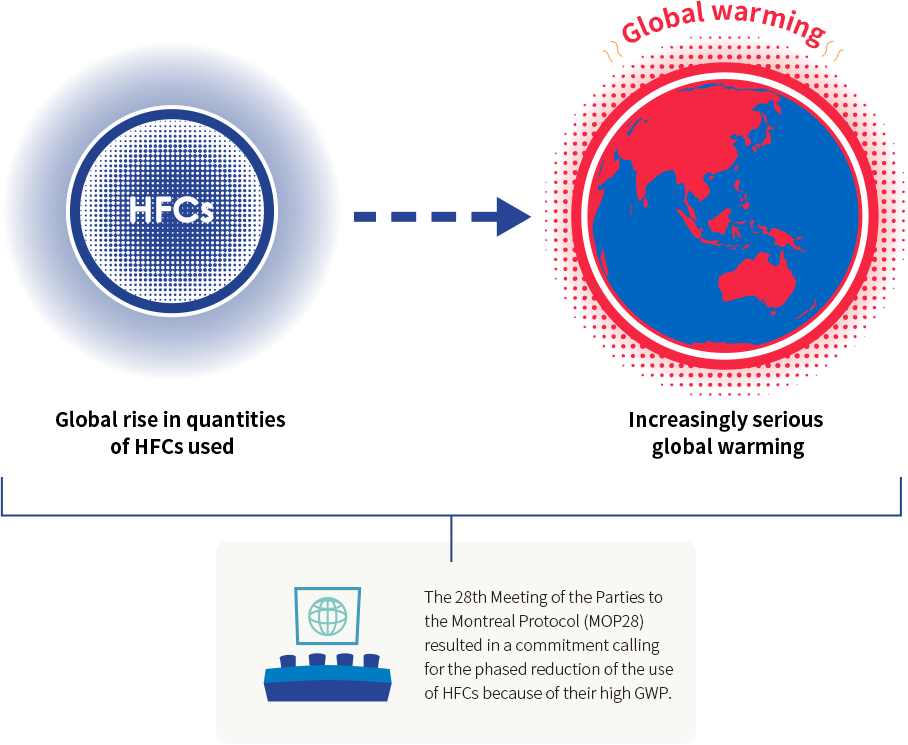 In response to the global warming problem, the international community made a commitment to the phased reduction of the use of high-GWP HFCs in both developed and developing countries*. Adopted in 2016, this reduction plan calls for an 80% reduction in HFC use in advanced countries by 2036, and in developing countries by 2047. In addition to efforts to achieve these goals, the international community is increasingly calling for the development of new alternatives to specified CFCs. 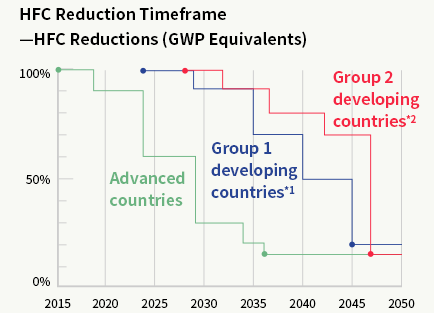 The Potential of HFOs

Hydrofluoroolefins (HFOs) are attracting
intense interest in the search for new chemicals
to solve the global warming problem. 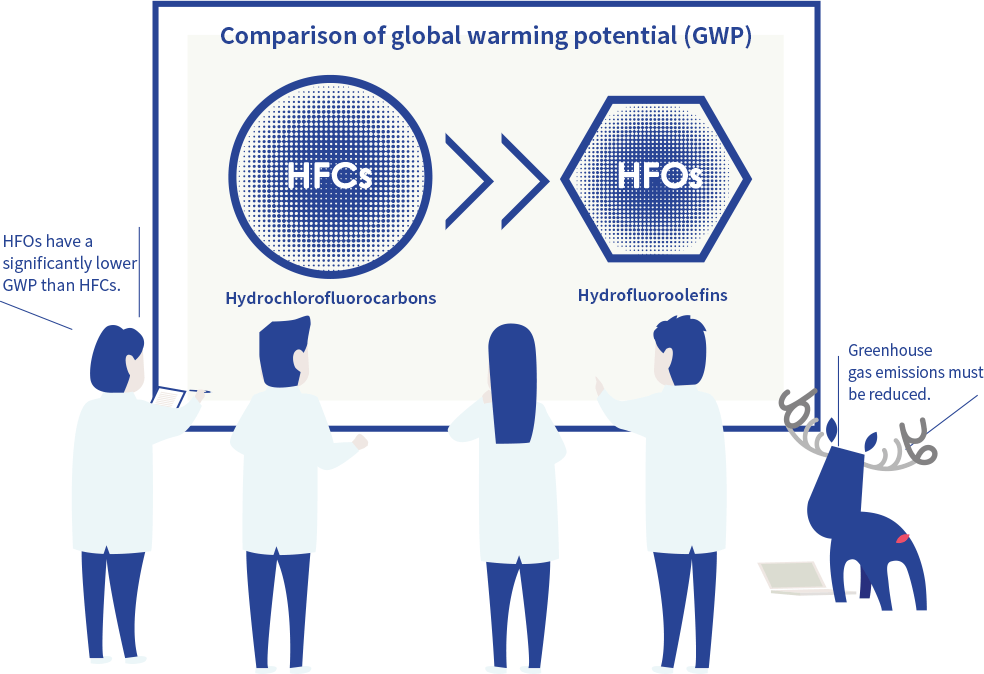 In response to rising international expectations toward the development of low-GWP alternatives, AGC began to explore the potential of hydrofluoroolefins (HFOs). Compared with HFCs, HFOs have extremely low single-digit GWPs. By commercializing these products, AGC would be able to make a major contribution to the reduction of greenhouse gas emissions. We began to develop products targeting key applications for which substantial quantities of HFCs are used, specifically HFC-134a, HFC-245fa, and AK-225. Our goal was to contribute to the solution of the climate change problem by developing HFC alternatives that would substantially reduce greenhouse gas emissions.

The Birth of the AMOLEA™ Series 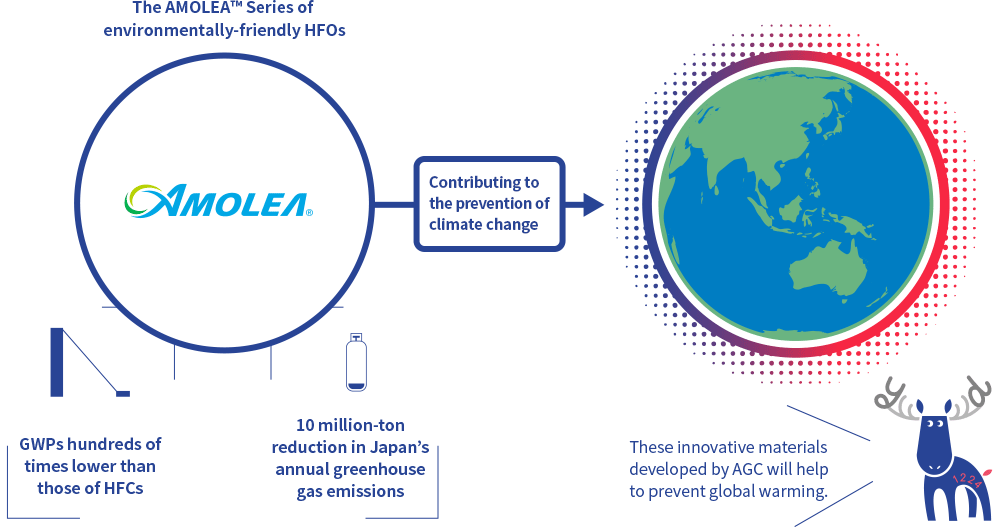 In 2018, AGC established an industrial production method for HFOs and commenced production in a commercial plant. We selected three HFOs with saturated bonds in their molecules—HFO-1234 yf, HFO-1224 ydZ, and AS-300—as new HFC-alternatives and began to market these substances commercially as the AMOLEA™ Series.
The AMOLEA™ Series of chemical products have extremely low GWP values while maintaining the same boiling points and safety characteristics as earlier products. Their GWPs are several hundred times lower than existing refrigerants or foaming agents, and by replacing earlier products with AMOLEA™ Series products, it will be possible to reduce environmental loads based on life cycle assessment (LCA) to around one-tenth. Just within Japan, this change has the potential to reduce greenhouse gas emissions by the equivalent of over 10 million tons* of CO2 per year.

Click the links below to see detailed information about AMOLEA™ Series Products.

The Japan Association for Chemical Innovation selected the AMOLEA™ Series for the Minister of the Environment Award in the 19th Green & Sustainable Chemistry Awards*.

* Green & Sustainable Chemistry Awards are given in recognition of outstanding contributions to the development of a sustainable society through the creation of chemical products that are kind to people and the environment. To be selected for the Minister of the Environment Award, a product must be recognized as making a significant overall contribution to the reduction of environmental loads.

The AMOLEA™ Series has been highlighted as an example of innovation under the “Challenge Zero*” program,
a social decarbonization initiative implemented jointly
by the Keidanren (Japanese Business Federation) and
the Japanese Government.

* Challenge Zero— Innovation Challenges towards a Decarbonized Society
This new initiative was established jointly by the Keidanren (Japanese Business Federation) and the Japanese Government to promote and support innovative activities by companies and organizations in Japan and overseas toward the creation of a decarbonized society, which is the long-term goal under the international framework for climate change countermeasures defined under the Paris Agreement.